The Safest and Fastest Way to Dig

Hydrovac excavation services, also called hydro vacuum excavation or hydro excavation, is the leading soft dig and non-destructive excavation technology. Adler’s hydro-vac trucks use high-pressure water to move soil while simultaneously vacuuming it into a storage container on the truck. It can then easily be moved offsite or to another location.

Hydrovac excavation technology is far more accurate than manual or mechanical excavation methods and is less destruction. Adler’s Hydrovac trucks do not leverage any mechanical means to excavate debris, reducing the possibility of damage to fragile underground infrastructure. Read on to learn more.

Get a Free Quote Now 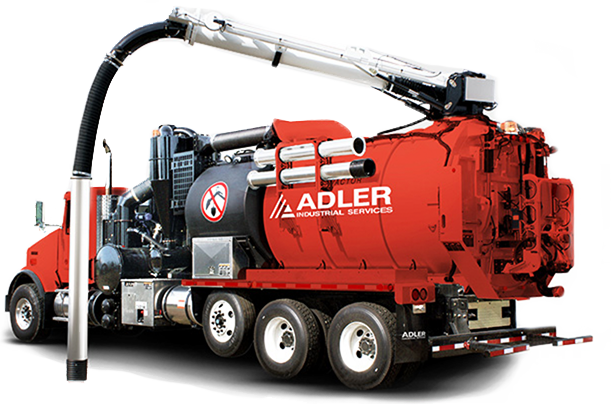 What is Hydro Vacuum Excavation

Popularized for its efficiency in Canada, Hydrovac Excavation is known for its ability to cut through frozen ground with heated water. However, there are several additional benefits and applications to using hydrovac excavation, which have led companies and contractors to rely on this method of digging to yield the safest and fastest completed jobs.

Hydrovac Can Be The Most Cost-Effective Way To Dig

Completing a job by using hydro excavation will save time, in turn saving you money. The dual process, digging and vacuuming, is what makes hydro excavation so efficient. Without vacuum excavation, the time to dig would then be followed by time to move debris into a dump tank to discard of the remains. Often times, the debris tanks are too small and require frequent trips to dump the sediment. Hydro excavation is around ten times faster than traditional digging methods, requiring less time on the job and a quicker return to daily activities.

Hydrovac Can Be The Safest Method of Digging

Without hydrovac technology, the process of excavation consists of dry digging using tools, equipment, or even explosives. This process for excavation can leave a large margin for error, including but not limited to: cave ins, falls and falling loads, hazardous atmospheres, or even cause damage to utility lines.

Conversely, hydrovac excavation is by far the safest method of digging. With an extension coming directly from the hydrovac truck to emit water, and precise digging techniques, the possibility for unsafe circumstances are tremendously minimized.

Utility strikes are a common concern when digging, but with Adler hydro excavation- this concern is lowered. Contractors have the ability to raise and lower the intensity of the water pressure at any time during the digging process to avoid damaging a wire. This would not be the case in an instance where shovels or back hoes were being used to dig.

Hydro excavation is considered environmentally friendly due to the lack of damage to the surrounding area. Additionally, the excavation process by means of water (or in certain cases air) is performed consciously, emitting only enough water to reach the desired depth. Water itself is a non-hazardous byproduct of the process.

Is Hydrovac Excavation Right For Your Job?

Can Hydro Excavation Work For Your Industry?

The process of hydrovac excavation can be applied to several diverse industries. From landscaping to pole installation, multiple fields can benefit from this method of digging. Listed below are some of the main industries which commonly use hydro excavation: 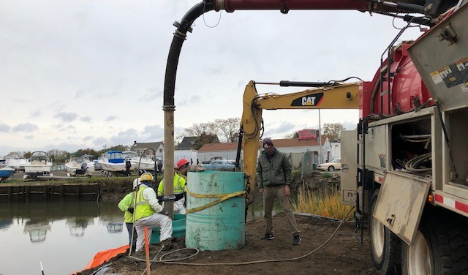 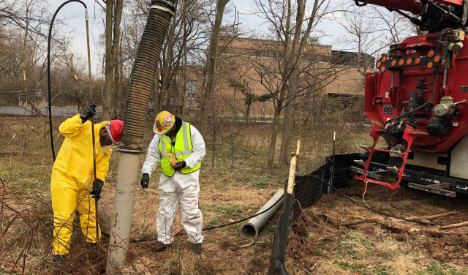 Plumbing, sewer systems, and piping are generally found underground. The only way to access a piece of the system would be to dig to it. The process of hydro excavation allows for digging that will not cause damage to the pipes below. This technique grants quick and easy access through hydro excavation for utilities below ground; for routine maintenance or to fix an emergency concern.

Numerous pieces of equipment need the ground to be excavated before installation. This includes items such as traffic lights, lamp poles, road signs, and even commercial grade trees for landscaping. It is important to dig far enough down as to create a solid foundation for the structures to stand in. Hydrovac excavation can perform quick and precise digging, which can create narrow to wide trenches to prep for large pole installations.

Common construction sites which aim to build commercial or industrial establishments cannot start without proper excavation of the site. The site might need foundations, reservoirs or roads, which can be achieved through hydrovac excavation. Alder’s vacuum excavation services can be used in a variety of construction-related scenarios, for instance; to be used as a means for excavating below a standing building.The time it will take to excavate the site, or below a structure, can be shortened by use of hydro excavation versus any traditional method of shovels and back hoes.

Potholing, or daylighting, is the process of digging to expose underground utilities, live gas lines or live electrical lines to the “light of day” for inspection or to determine the utilities’ location. This process works to increase productivity, enhance project safety, and decrease the overall costs of the project. Daylighting by Adler hydro excavation ensures precise digging and minimized risk of utility damage.

This type of hydro excavation is required to create installation holes. The holes necessary can be any size or depth. Traditional methods, such as the backhoe, often extract more soil than necessary, thus requiring back fill, and therefore increasing the time spent on the job. Pole excavation requires hydrovac excavation because it is exactly to size, clean and fixed.

Slot trenching is the process of digging narrow trenches for pipe or cable installations, or viewing intersecting underground utilities. Since conventional slot trenching is dangerous and time consuming, and cannot dig narrow enough trenches, hydro excavation is the best option for slot trenching. Adler Hydro Excavation provides accurate and precise digging without the use of heavy equipment creating a much safer environment.

Air excavation is a low impact style of vacuum excavation. It is generally used when the utilities beneath the surface are sensitive and require careful navigation. The aspect of non-conductivity is appealing when dealing with underground utilities, such as electric cables, gas lines, fiber optic cables and other types of underground utilities. Air excavation is often times also quicker than Hydro excavation because there is no need to dispose of or import any soil. However, Air Excavation, although possible, has a limited impact in comparison to Hydro Excavation on solid or frozen ground.

Hydro Excavation has a more intense impact on tougher ground. Hydro Excavation is sometimes preferred because of the way the water brakes up the soil and erodes ground, such as clay, faster than air. This style of excavation might be quicker when dealing with select soil but if the site requires a backfill, Air Excavation would be a quicker method. Another difference between the two to consider are the necessary materials. Hydro Excavation of course requires water as its main resource, so it is helpful to factor in travel distance from a dump site.

Both methods of excavation have their pros and cons for certain scenarios. In some instances, both styles of excavation are used to complete a job. Consider an excavation type by means of safety first, and the decision will always be correct.

Adler Hydrovac excavation requires a truck which can: hold the vacuum source, a water tank and water system, a boom, host, and debris tank. A vacuum excavation truck can have one of two vacuum sources: one being a fan system and another being a positive displacement blower. The PD grants the ability to move air at longer distances compared to the fan system. This system allows for digging at greater depths.

Hydrovac excavation uses the high-pressure water to break up the soil, leaving minimal disturbance to the surrounding areas, instantaneously vacuuming up debris which then transfers into the debris tank. Adler's hydrovac truck obtains all of the necessary parts to efficiently complete the excavation job.

The Best Trucks in The Industry

When looking for the right hydrovac excavation services, there are a few things to keep in mind: certifications, experience, and service quality.

A company that is professionally sound will have all required certifications and be in compliance with the following: all government, client-specific, or site-specific requirements, OSHA certified, confined space trained, and Emergency Response Hazwoper trained. These certifications and trainings assure you that the chosen hydrovac excavation service is qualified for the job.

The method of hydrovac excavation is a safe way of digging, however it is important to know how to perform the task safely as well. That’s why it is critical that you hire a provider who is experienced and knowledgeable in the field. Companies, like Adler, have been working in the industry for over 40 years and even offer case studies to showcase their experience and offer reference. Knowledge and expertise yields efficiency and safety which together will save you time.

Find a provider who will listen to your needs before jumping into a job. There might be several different ways to complete a job, even with one technique. It is important that the service provider you choose is certified and experienced enough to assess the job accurately and make informed decisions as necessary.

With Adler, you will find a positive solutions-oriented attitude. Our team is always accessible and eager to respond to your needs. At every level of our organization, you will see a commitment to consistently high customer satisfaction. We are driven to be your single source for all of your hydro excavation needs.

We provide hydrovac excavation services for the following areas: 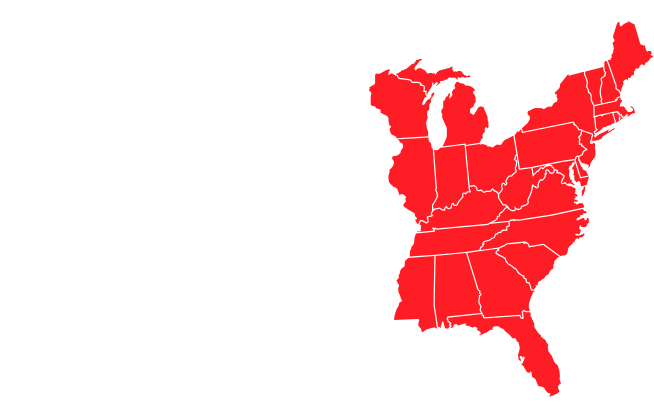 Safety Is Our Priority

We believe in safe environments. Safety is not only the law, it is our goal; we consistently strive for zero risks for both our employees and customers. Our comprehensive Health and Safety policy along with our employee training allow us to create the safest environment possible. Therefore, we have achieved:

Get A Free Quote Today